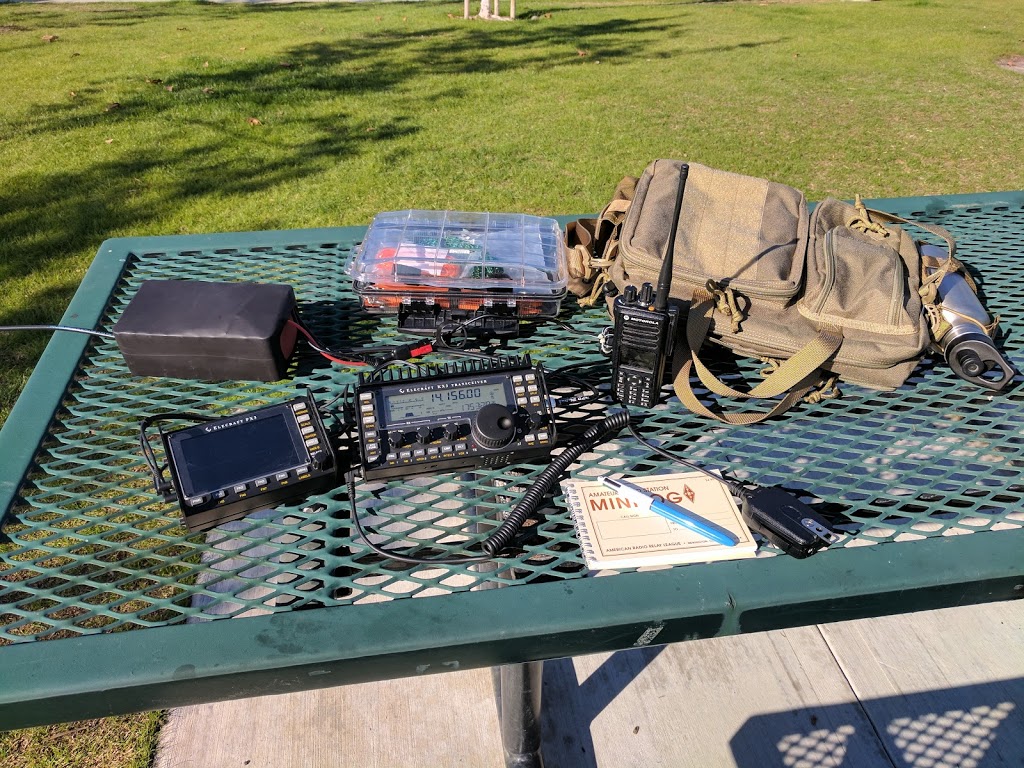 I decided to avoid Black Friday and get away from stores, but not site at home watching TV either.

I packed up my Elecraft KX3 and headed for a local park.

The plastic box is for my wire antenna. It has way more stuff than I needed and I think it weighs more than the antenna…so I may abandon it for future trips. I also brought my 20AH LiFePo3 battery. The voltage didn’t drop at all during the entire 3 hours. I’m going to bring a smaller battery next time.

I setup an end-fed wire antenna and operated for about 3 hours. I only made five contacts, but it was still fun. The noise level was much lower than at home.

I need to figure out how to log an NPOTA (National Parks On The Air) contact as I connected to a station in Washington that was calling from a National Park.

The bag is great for the KX3, it is a +Maxpedition Incognito Quad. The inside is just the right size for the KX3, PX3, and my battery. I couldn’t have asked for a better fit. There are large and small compartments on both sides for ample storage.

I will probably move the antenna out of the box into the large external pocket.

I added MOLLE attachments to the ends of the bag, one for my hand-held radio and the other for a water bottle.

For travel I picked up end plates, that give the radio what looks like rack handles, and a plastic cover from Scott AK6Q of GEMS Products. These parts are first rate and I can’t speak highly enough about them. I have these for both my KX3 and PX3.

WindCAMP sells pouches for the KX3 and PX3 that will fit with the endcaps and covers. You can find these on their eBay store. Search for “WindCAMP KX3”.

Here are a few more detail shots of the bag. You can see how well the radio gear fits inside. The main pouch is lined with fuzzy material. Kind of like microfiber, but tough enough for Velcro to stick.

The large compartment on one side has an organizer, the other side is more open with the same liner as the main compartment. There is also a large Velcro field on the outside. I order a couple of Velcro backed name tapes with my name a call sign. I think it’s a nice touch.