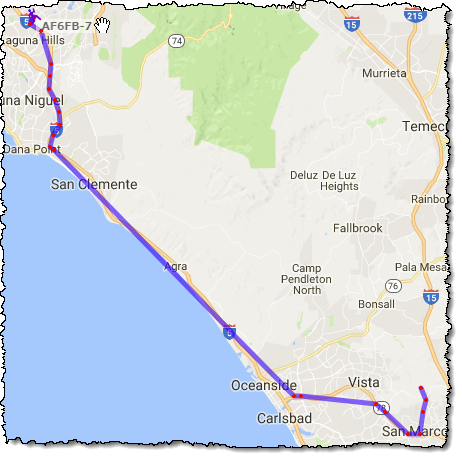 Do you use APRS? Have you tried using it with a modern dual-band radio? It works well with D-STAR. For DMR it works a little different, it’s even different between radio manufacturers. Learn more about what I found.

I’ve been looking at the differences between GPS tracking on Hytera and Motorola DMR radios. In this test I used a Hytera PD782G and a Motorola XPR7550. Both were on the most recent firmware during the test.

Hytera radios work differently. The radio controls the reporting interval. And, the software gives you more control. You can set a reporting interval, but you can also report based on distance traveled. In my case, I am set to report at five minutes intervals or after about one mile has been covered. In addition, Hytera radios can send GPS reports with every press of the PTT. But, this only works when using a Hytera repeater or an MMDVM-based hotspot or repeater.

The images below show the differences in tracking detail. For this test I had both the Hytera PD782G and the Motorola XPR7550 radios sitting on the passenger seat of my car while I was driving. They were both set to roam and transitioned repeaters a couple of times over the course of this 60 drive.

The biggest differences are at the beginning and the end of the trip. You can see the Hytera started tracking sooner and picked up more detail as I started driving from South to North. The Hytera also gave more detail at the end of the trip. Neither radio did well between Oceanside and San Clemente. I think this is due to generally bad repeater coverage in the area. I’ll have to try this again with a hotspot in the car.

What are your experiences? Have you used tracking on either platform? Respond in the comments.